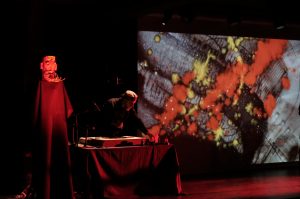 The staging includes a calligraph (Frank Lalou), a soprano (Elodie Tisserand), and the public. Indeed, this show was probably one the first (maybe the first) show where the public was active in using smartphones to control the sound during two scenes, in a mode we call Massively Interactive Music (MIM).

The basic concept of MIM is to elaborate systems where the control of the scene is moved or partly moved from the actors, musicians, and even composer to the public. Massively means that the public can range from some individuals to hundreds of people. This asks several questions in terms of system, technical and musical architecture, human interface, programming and even sociology. The basic and static scheme of music production through composer, musician, spectator is disturbed. The level of possible interactions literally explodes. If we consider the actors implied in a basic MIM system we have at least: the individual, the public, the interactive system, the system controller and the sound system. These five levels bring !5 = 120 interactive paths. In case of a soloist in concert we have 2 paths of interaction (public-> soloist, soloist-> public), an orchestra with a chief bring !3 = 6 paths of interactions. 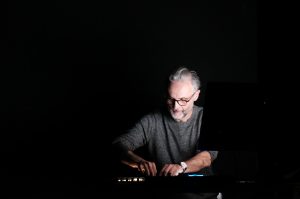 tem based on Hop and HipHop, which was able to control an Ableton Live set. The choice of Ableton for controlling the sounds was mainly due to the model of synchronized “clips” implemented in Live. This model largely used, not only in popular music, has the advantage of being quite simple to approach, and it benefits from a reliable implementation. This is nevertheless not the only model possible, and researches on MIM will certainly propose more complex paradigms.